Monitor uptake, metabolism, and excretion of Exogenous VOCs (EVOC®) in breath through our Breath Biopsy Services

An important advantage of Breath Biopsy is the ability to introduce chemicals (individually or a cocktail) that are not normally found on breath to a patient to explore how they are absorbed, metabolized, and excreted.

The power of this approach has driven the development of Owlstone Medical’s Exogenous VOC (EVOC®) Probes, safe compounds that when administered are metabolized in the body and are excreted via breath. In this way, a clear readout of metabolism can be determined by measuring the levels of these chemicals and their metabolites.

Owlstone Medical is focused on the development of EVOC® probe-based Breath Biopsy applications to support of research taking place in academic, clinical and pharmaceutical settings. Our initial focus is on liver function and health, and drug metabolism testing where we are able to target specific enzymes in the liver (e.g. CYP450 family), however they also hold great potential in a wide range of additional applications. By building on understanding of biological pathways, specific metabolic targets can be identified and exploited to reveal the presence of disease.

Terpenes are a large class of hydrocarbon compounds which are then acted upon by a range of enzymes. As an example of the use of EVOC® Probes, an EVOC® Probe (a capsule containing several terpenes) was administered and breath collected and analyzed over a period of 8 hours in a ‘washout study’. As shown in Figure 3, ingestion of the capsule resulted in a marked increase in concentration of terpenes in breath after 30 minutes, compared to baseline levels while no increase was observed for endogenous compounds not contained in the EVOC® Probe, such as acetone and isoprene. Levels of terpenes then decrease over time, returning to baseline levels by 6 - 8 hours after capsule administration.

From the washout experiment, three time points were selected (pre-ingestion control, peak at 45 minutes and plateau at 3 hours) for inclusion in a longitudinal study where the washout experiment was repeated multiple times over 5 weeks. In the longitudinal study, fold changes for all compounds are presented for the peak and plateau time points, relative to the corresponding pre-ingestion control baseline (Figure 4). Breath metabolites acetone and isoprene show only small differences between peak and plateau fold change as expected, however large fold changes are observed for the
peppermint-related VOCs such as α-pinene, β-pinene, although high variability is observed for peak data points.

As seen in Figure 4, as few as three timepoints can be sufficient to observe differences in the levels of breath metabolites following administration of an EVOC® Probe, with samples collected to establish baseline, and at set times (which can vary based on the individual EVOC® Probe) to measure peak levels and when washout will have substantially occurred. This profile, when compared with a broader population, can then be used to determine the relative metabolic response of that individual to the EVOC® Probe.

Owlstone Medical have developed the capability to quantify VOCs in breath related to our EVOC® Probes. The following EVOC® Probes are currently available in the kit. Additional Probes are under development and will be added to the Kit when validated. 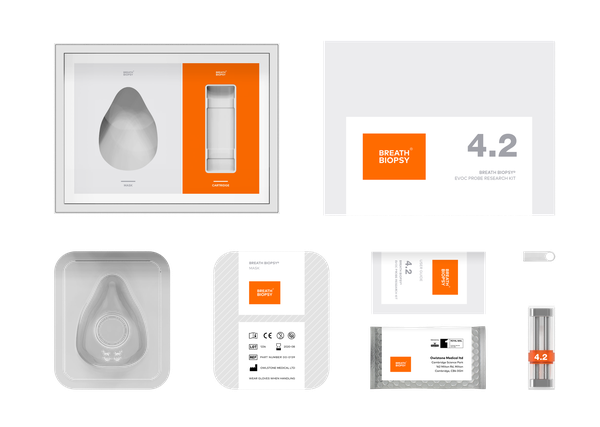