Published on 03 May 22, under Gut & Digestion, HMBT, Science & Research

The need for meaningful diagnosis of functional gastrointestinal disorders has led to increasing use of hydrogen methane breath tests (HMBTs) as a diagnostic tool. In 2017, informed by experimental work and expert opinion, a consortium of specialists published the North American Consensus (NAC), consisting of 26 suggested guidelines for performing reliable, standardized HMBTs. A recent study by Pitcher et al.1 from Functional Gut Diagnostics compared results based on the NAC to previous methods concluding that the NAC guidance leads to an overall improvement in diagnostic performance.

Over one billion people worldwide are thought to be affected by gastrointestinal illnesses. Symptoms are often non-specific and difficult to diagnose leaving patients with few options for effective management. In addition, the economic impact of these illnesses and the burden they place on healthcare systems is significant. For example, estimates suggest that as many as one in eight primary care visits are due to irritable bowel syndrome (IBS).

IBS affects around 11% of people and small intestinal bacterial overgrowth (SIBO) may be a factor in as many as 80% of these cases2. Increasingly, non-invasive breath tests based on detecting exhaled hydrogen and methane are being used as an accessible way to diagnose SIBO as well as lactose and fructose malabsorption. Part of the key to the success of these tests is that they can be done by the patient at home and sent off for specialist analysis.

The growing popularity of breath tests for digestive diseases led to the North American Consensus in 2017, which aimed to provide standardized guidelines for the optimal interpretation of HMBTs3. All tests involve consuming a sugar substrate at the start of the test and then collecting several breath samples to measure the production of hydrogen and methane over the next several hours.

Watch our animation to see how HMBTs work

What did the NAC change?

The NAC proposed several changes to HMBTs with the goal of improving the accuracy of results and consistency across test providers. The most common test uses the indigestible sugar lactulose as a substrate to detect SIBO. Lactulose is often used to increase digestive transit, which has a risk of producing false positive results. To help improve specificity, the NAC reduced the dose of lactulose, increased the change in hydrogen needed for a positive result and extended the sampling time.

SIBO can also be detected using glucose as a substrate for HMBTs. Unlike lactulose, glucose is rapidly absorbed in the upper intestine meaning it has the potential for false negatives. The NAC increased glucose dose to 75g aligned with the dose typically used for diabetes testing.

Lactose or fructose can be used as substrates for malabsorption tests. The NAC recommended collecting breath samples over a longer period of time.

What is the effect of the NAC on disease detection?

Pitcher et al. performed HMBTs over several years. Initially, they used the pre-existing method but revised this upon publication of the NAC. Where possible, they analyzed all samples using both pre-NAC and post-NAC criteria to allow further comparisons to be made.

Overall, the changes had little effect on the detection of methane in any of the tests, which seemed largely unaffected by patient dose. The authors suggest that a single baseline measure of methane may even be sufficient to identify illness.

For people taking the higher dose of lactulose, the number of positive results was similar irrespective of analysis method (106 vs 108) although 30 people received a different result depending on the method used. The difference in positive results was more pronounced with the lower dose of lactulose (84 vs. 113) and 49 people had different results depending on the analysis method.

Pitcher et al. conclude that reduced dose is favourable for patients and reduces symptom severity and the chance of false positives. In contrast to NAC, they advocate for continued use of both analysis methods based on the view that this produces more conclusive results and helps to highlight and inform decision making around borderline cases – those that test positive by only one method. This is supported by the observation that a high proportion of patients that tested positive by both methods (74.3%) experienced increased symptoms during the test, an additional diagnostic indicator. By contrast, borderline cases were similar to negative cases in being much less likely to report experiencing symptoms (42.9% and 41.6% respectively). 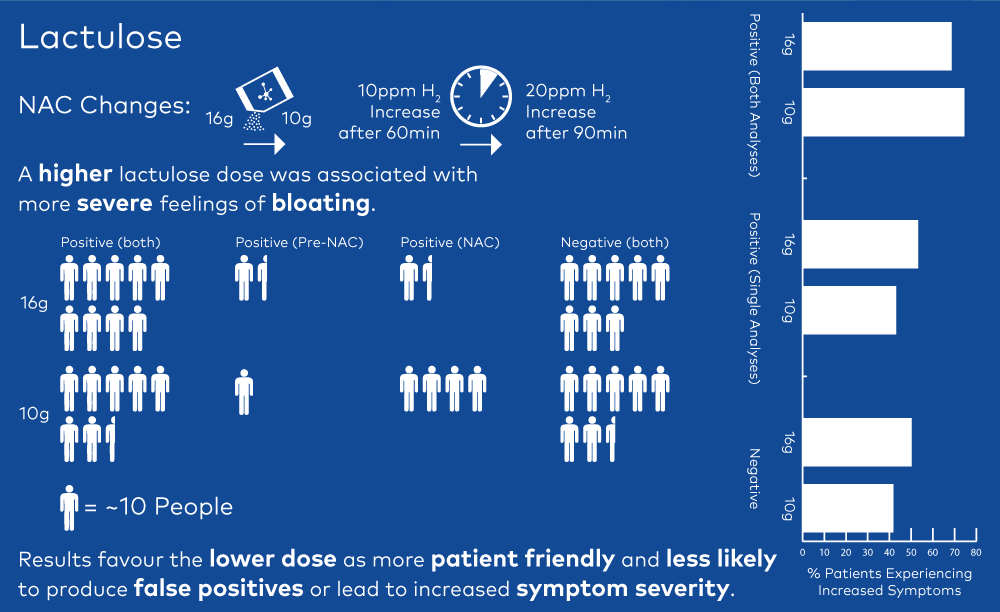 Given the potential for false negatives in glucose tests and the minimal adverse effects, Pitcher et al. support the increased dose proposed by the NAC.

Malabsorption tests for Lactose and Fructose

Pitcher et al. examined the number of cases of lactose or fructose malabsorption that could be detected within 60, 120 and 180 minutes of the start of the test. Around 1 in 3 positive lactose results and 2 in 3 positive fructose results could be detected within the first 60 minutes. By contrast 1 in 4 lactose and 1 in 8 fructose positive results were identified in the 120 to 180 minute time period. 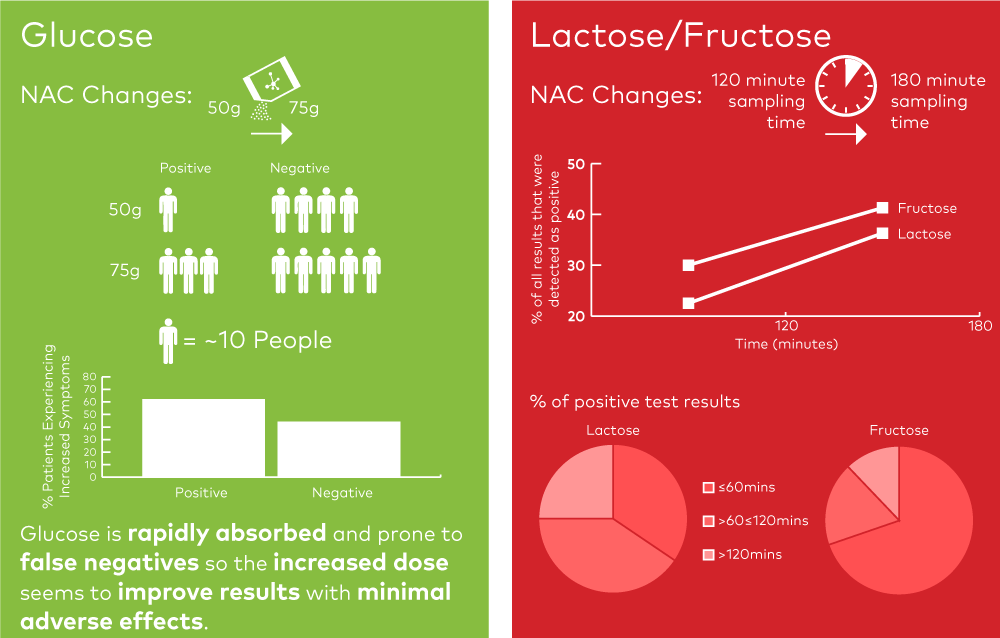 The NAC and the future of HMBTs

A key limitation of this work is the lack of gold standard data that could be used to distinguish true and false results. However, by relying on comparison to the occurrence and severity of symptoms, these results broadly support the widespread use of the NAC guidance for the clinical application of HMBTs for SIBO and carbohydrate malabsorption. Additionally, it proposes the use of multiple criteria for determining positive results in lactulose breath tests, indicating that this can help to identify borderline cases and inform more robust decision making in relation to patient care. 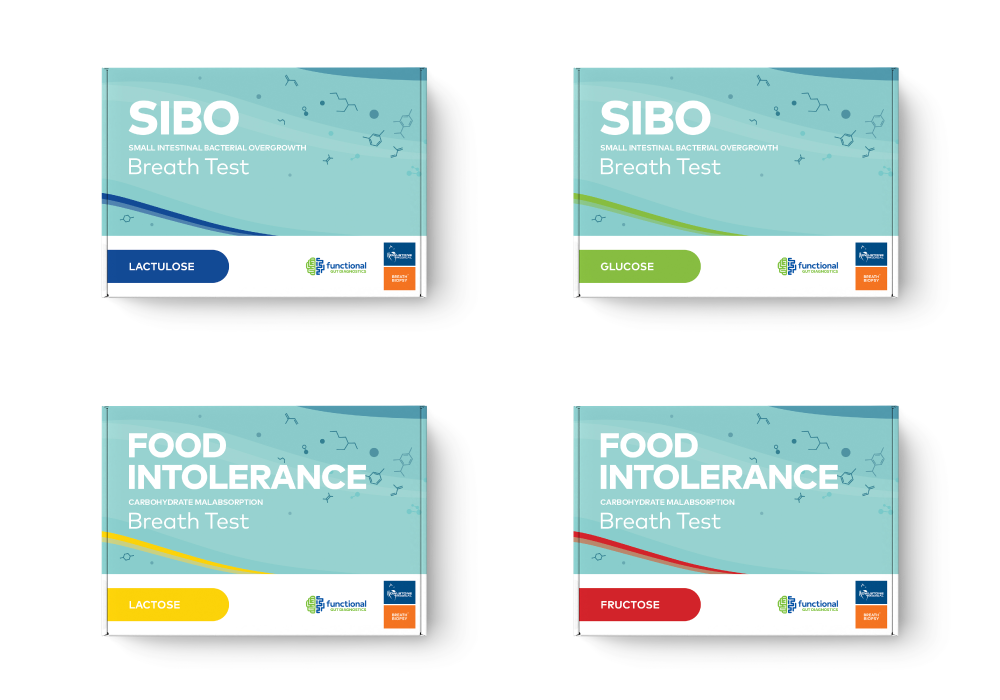 In partnership with Functional Gut Diagnostics, we are able to offer a full range of HMBT kits and analysis services to support gastrointestinal healthcare professionals in the UK NHS and private healthcare to diagnose SIBO and carbohydrate malabsorption.

We're already working with 9 NHS trusts and we can help you offer breath testing to your patients at a competitive price too.

Find out more      Get HMBT for your patients

Unlock the secrets of the gut microbiome with breath testing