IABR 2019: Highlights of the Breath Summit at Loughborough University

Research Assistant, Tilly Woodland joined Owlstone Medical earlier this year after completing a Master's degree in Chemistry at Loughborough University. In September, along with other members of the organization, she attended the IABR Breath Summit. We asked her to review some of her highlights from the meeting.

After a fantastic few days in Loughborough, we're now home from the 2019 International Association of Breath Research’s 18-monthly conference. For many of the Owlstone Medical contingent, the conference was a trip down memory lane; as a number of us completed either our undergrad or postgraduate degrees at Loughborough University. So, with the newly designed ReCIVA® and CASPER™ in tow we headed to the conference.

It was good to reconvene with so many delegates, including regular users of the Breath Biopsy® platform, the teams from Loughborough and Manchester University as well as Chris Mayhew and Agnieszka Smolinska who have worked on projects including asthma phenotyping and liver function tests.

The talks and focus groups held throughout the conference, explored the advances and unanswered questions of the field and highlighted where improvements are needed to progress the current research.

To kick off the week the Anton Amann Award was presented to Terence Risby, for his outstanding contributions to the field of breath analysis. Risby is a Professor Emeritus at Johns Hopkins Bloomberg School of Public Health in Maryland, USA. Over the years his work has focussed on highly sensitive analytical techniques to non-invasively detect biomarkers of disease and tissue injury.

Professor Risby’s research has discovered breath markers of liver function and disease, tissue injury from exposure and biosynthesis of cholesterol in children and adults. In one of the most interesting parts of his talk, he highlighted the importance of both inducing and blocking a feature in order to verify the significance of a biomarker. His talk covered the main aspects of his work through the 1990’s to the early 2000’s and provided a great start to the event.

IABR brings together breath researchers from around the world and covers a huge range of diverse research questions. Many of the talks this year featured our Breath Biopsy platform; it was exciting to see the wide range of research that our work is helping to support.

Some memorable talks included Dahlia Salman speaking for the EMBER team who are using ReCIVA to study radiation response of patients pre- and post-cancer treatment. Andria Hadjithekli from Loughborough University spoke about using Breath Biopsy in projects like Toxi-Triage and an investigation of pesticide self-poisoning in young people in Sri Lanka.

Finally, Karl Holden from the University of Leicester talked about the patient perception of the ReCIVA device. What I found most interesting was the variation between disease groups like; asthma, COPD and lung cancer. These differences in lung health have some noticeable effects on breath collect times and breathing traces, which are useful to know about when developing ReCIVA further. Holden’s team gave participants a survey to measure how hard they found the breath sampling process. Thankfully, despite having diseases that impair lung capacity, patients did not feel that the task was arduous.

Use of Limonene as an EVOC® Probe

Of course, a major highlight for us was the talk by our own Senior Applications Chemist, Rob Smith, who presented our recent work using orange juice as an EVOC® Probe to assess the impact of liver disease on the build-up of limonene in the body. Liver damage reduces the activity of certain enzymes that metabolize limonene therefore, this compound builds up in the liver and in the blood. As such, limonene could be used to assess liver function.

Patient samples were analysed containing control, liver cancer (HCC) and cirrhosis cases. The preliminary results showed a notable difference in limonene levels between the groups. The results attracted a lot of interest from our collaborators, including Chris Mayhew, whose previous work on limonene in patients with liver cirrhosis was corroborated by the results of this study.

This interest led to a very informative and lengthy discussion about the results from our first patients which were viewed as very promising in the light of Chris Mayhew’s similar results. This discussion gave us more context about the use of limonene as an EVOC Probe, with Anil Modak contributing additional information on existing liver function tests and the need for a new approach based directly on metabolic rate. Current tests attempt to determine metabolic activity based on genotype, yet this only has limited relevance to actual metabolism due to variation in gene expression and environmental factors. The need is for a test which can determine the metabolic phenotype directly, providing a snapshot that takes diet, medication and lifestyle as well as genotype into account.

Conferences can be an intense environment and it was good to be immersed in the latest analytical chemistry research. But IABR is also a fantastic opportunity to meet new people and build connections across the breath research community.

I had a great time getting to know the scientists in the breath research community as well as their work. Social events at the conference were inspired by classic UK activities including a pub quiz and a Ceilidh – a type of traditional country dancing, with a live band. It was a lot of fun watching everyone trying hard to learn the routines and get their steps right.

We really enjoyed IABR and being back at Loughborough. We met a lot of outstanding researchers and explored some great new opportunities for the Breath Biopsy platform. We are hoping to reconvene with some of these people at the 2019 Breath Biopsy Conference in Cambridge this November. 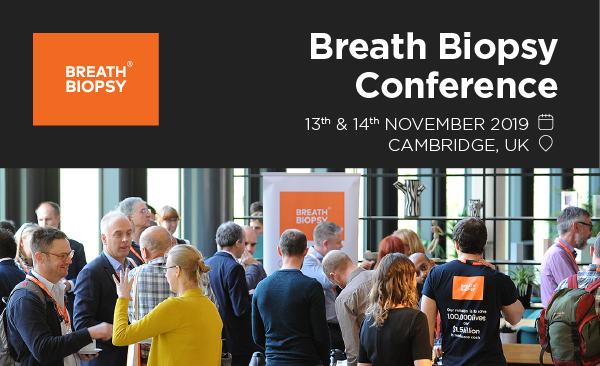 Join us at the next Breath Biopsy Conference