Breath Analysis of Liver Diseases – The Story So Far

The occurrence of non-alcohol related liver diseases in many countries is reaching epidemic proportions driven by poor diets and poor health regimes. Estimates suggest as many as 3 in 10 people [1] may have the early stage liver disease non-alcoholic fatty liver disease (NAFLD) and this is even higher amongst overweight and obese populations. 10% of US children are also thought to be living with NAFLD [2].

While NAFLD is typically asymptomatic, it is the first step on a progression that can lead to cirrhosis, liver fibrosis, liver cancer, hepatic encephalopathy and a range of other severe and debilitating conditions. Liver diseases are placing a significant demand on healthcare systems and improved early detection of NAFLD could save lives and reduce pressure on medical care by allowing more people to take preventive action before their livers suffer irreversible damage.

The current gold standard for liver diagnoses is a biopsy. Biopsies are invasive and expensive, placing stress on patients and causing risks to health. This means that they are impractical and unethical for use in early stage disease detection. An effective non-invasive test that could be applied in a primary care setting would transform the detection and monitoring of liver health.

The liver is at the heart of many key metabolic pathways in the body and, as such, the products of metabolism offer an ideal target for monitoring liver function and to detect the early signs of disease. Various studies have used blood [3, 4], fecal [5] or urine [6] samples to detect late-stage liver conditions, but perhaps the most promising approach involves detecting volatile metabolites in breath (read our other blogpost to understand why breath collection is a promising approach for studying liver diseases).

The Smell of Liver Failure

The earliest evidence that breath can be linked to liver disease comes from Ancient Greece and Hippocrates’ description of fetor hepaticus – distinctive bad smelling breath resulting from the liver failing to correctly metabolise sulphur containing compounds. We now know that the smell itself is primarily linked to an increase of dimethyl sulphide in exhaled air [7]. While fetor hepaticus demonstrates that metabolic changes can be reflected in breath, alone it is of limited use as it indicates late-stage liver disease.

Over the last 50 years, the development of advanced chemical analysis and identification technologies such as gas chromatography mass spectrometry have made it possible to study the trace chemical compounds in breath in detail and to begin to identify compounds associated with specific health characteristics.

A number of studies have examined breath samples for biomarkers of liver diseases of different types and at different stages [8, 9, 10, 11]. The majority of these focused on more advanced conditions or on the distinctions between alcohol linked and independent conditions. These studies have typically been able to produce high-quality discriminatory models within their discovery populations.

Compounds linked to advanced liver conditions have included dimethyl sulphide [11, 13, 17], ethanol [14, 15], acetaldehyde [13, 14] and short chain alkanes such as ethane [16] and pentane [13, 16]. As mentioned above, dimethyl sulphide is a component of fetor hepaticus. The links between ethanol, both dietary and endogenous, and the liver are self-apparent, while acetaldehyde is involved in the alcohol dehydrogenase metabolic pathway. Ethane and pentane are the type of alkane molecules released as a result of lipid peroxidation, symptomatic of oxidative stress in cells.

A smaller number of studies have investigated the detection of early-stage liver diseases like NAFLD – specifically a form of NAFLD called non-alcoholic steatohepatitis (NASH), which is most likely to progress to more severe conditions [17, 18, 19, 20]. In comparisons, breath testing has outperformed other modes of detection in generating discriminatory models that can reliably detect illness. A systematic study of breath analysis in hepatology has recently been published [21].

In 2015, the results of a longitudinal study reported a significant reduction in the levels in breath of five VOCs in liver patients following successful liver transplants [22]. One of these VOCs was limonene, a widely used food additive. Limonene is also known to have a clear link to liver metabolism and health as it is typically processed by the enzymes CYP2C9 and CYP2C19, predominantly found in the liver. The same group also later showed that limonene is elevated in patients with hepatic encephalopathy [23].

Limonene is an exogenous VOC, meaning that it originates from sources outside the body, typically in diet. While the studies above detect this dietary level of limonene, these results demonstrate the potential to specifically administer limonene and monitor its levels in breath as a means to assess liver health. Other studies have also used exogenous chemicals to probe liver function. Isotope labelled 13C-methacetin tests for example have been used to investigate liver fibrosis [24, 25].

Changing limonene levels offer a specific read-out of the activity of the CYP2C9 and CYP2C19 enzymes. These enzymes are part of the large CYP450 family, of which just 10 to 15 members are involved in the metabolic processing of over 75% of modern drugs. As such, being able to monitor the activity of these proteins could be useful in predicting how a patient will respond to treatment with certain drugs.

Currently there can be a lot of guesswork and trial and error involved in finding the optimum treatment regime for a patient. This can be a lengthy and arduous process, and patients can experience a range of undesirable side effects. Exogenous compounds like limonene could help to better inform the design of drug treatment regimes by measuring the activity of relevant CYP450 proteins. To this end, Owlstone Medical have developed a selection of exogenous VOC (EVOC®) Probes.

EVOC Probes can be used in conjunction with the Breath Biopsy® platform to offer a new approach to investigating liver function both in healthy individuals and for those affected by liver disease. Since EVOC Probes are classed as food additives and don’t include labelled isotopes, they are also easy to integrate into new and existing studies. 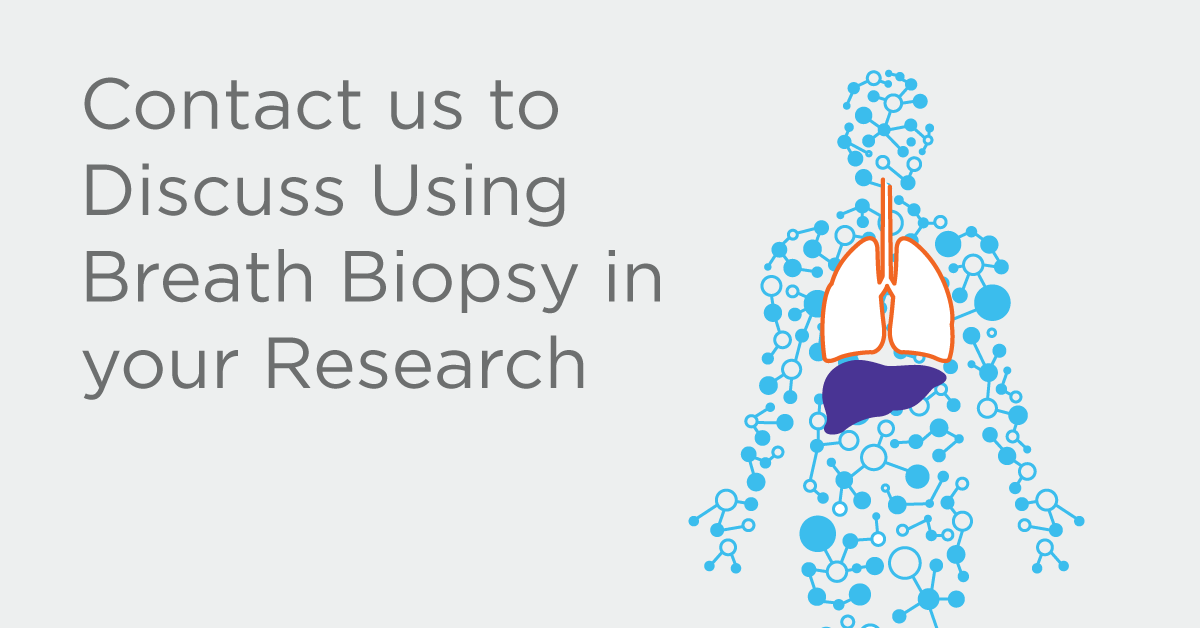 The role of short chain fatty acids in diseases of the gut, brain and cancer

Use Breath Biopsy to Find Breath Biomarkers for Liver Disease