Ovarian cancer is the seventh most common form of cancer in women worldwide. Each year, there are an estimated 239,000 new cases of ovarian cancer, and an estimated 152,000 deaths. Current 5-year survival rates, of around 30-40%, have shown very little increase since 1995 - the key to changing this is to detect more cases at Stage 1, when the tumour is still localised, and the 5-year survival rate is 92%1.

A 2018 study by Niemi et al2 at Tampere University Hospital and the University of Tampere investigated the potential for FAIMS analysis of urine headspace to be used in ovarian cancer diagnosis. The principal aim of the study was to determine whether FAIMS analysis of urine samples, given by patients immediately before an operation, could be used to differentiate malignant from benign ovarian tumors, and both types from controls. A total of 69 samples were collected - 51 from women with tumors, and 18 from women with genital prolapse as a control group.

Analysis was carried out using Owlstone Medical®'s Lonestar VOC Analyzer and ATLAS Headspace Sampler, following the protocol laid down in Arasaradnam et al3. Linear (LDA) and quadratic discriminant analysis (QDA) were used to determine which features of the FAIMS spectra could be used to discriminate between the various disease classes. 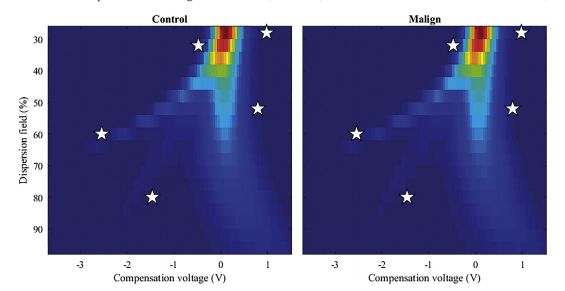 Figure 1: FAIMS spectra from a patient with ovarian cancer and a control, with stars marking the areas of the spectra giving optimum discrimination between the groups

Using QDA, benign tumors were distinguished from malignant tumors with 91.5% sensitivity and 51.4% specificity. The specificity improved to 79.7% when compared only to high grade malignant tumors. It was also found to be possible to distinguish between high and low grade ovarian cancers with a sensitivity of 87.8% and a specificity of 89.6%. Based on these results, the research team concluded that FAIMS has the potential to be used as a non-invasive method in the detection of ovarian malignancies.